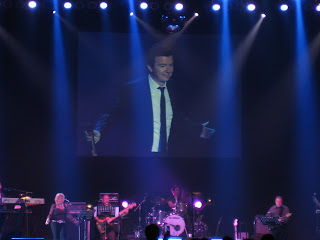 I never thought I'd be watching.

I actually got the idea from Spanx. He was the one who started it all (in my opinion!).

It was actually my Panget who was pestering me all day yesterday to watch the concert. Being an 80's kid - I knew most of the songs - but my Panget, knows ALL of his songs. He even has ALL of them in his iPod! Hahaha..

He was sending me corney (but cute) messages all day using lines and titles of Rick Astley songs. By then time we finished work - he decided to purchase 2 Upper B tickets, he was really keen on watching. I was shocked. But our good grace came in the form of a text message sent by a friend to my mom. It was really unexpected. The text read 'Ma'am - I have 2 tickets for you tonight'. My mom and I wondered what kind of tickets - the reply said 'It's compli (compliemtary) Ma'am'. I was jubilant - but I think my Panget was more jubilant than I was when I told him of the great news!

We got to the Araneta just in time - the show started late. The front act was a band from Bacolod - and I couldn't help but laugh when they sang the first song. We built this Sit-teh, we built this sit-teh on rock and roll! Hahahahaha...

I was able to capture in video the whole Kuya Dick singing and dancing with Kuya Rick 'Never Gonna Give You Up' number. But I'm somehow having a hard time uploading it on Youtube (anyone care to help me??)

So for the meantime, I hope the pictures will suffice! 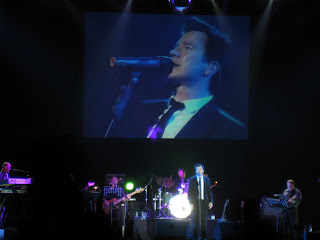 My favorite song in the whole concert was 'Cry for Help' but the best part of the concert? Well, of course - the Kuya Dick and Kuya Rick number. As Rick said 'It doesn't get any better than this!'

I had such a blast singing with my Panget and dancing too!!
Spotted a couple of celebrities, former flames of friends and friends too! Hihi..

Well, it was worth the wait - it was such great show! I wish he could sing all the songs again for another time! I really found it cute that he wears glasses now.. :)