February 07, 2011
I heard of this Chinese restaurant from my future brother in law - he said that they also serve Xiao Long Bao.  So yesterday - after doing some baby shopping, my friend Selene suggested we go to Shi Lin at the Podium for an early dinner. 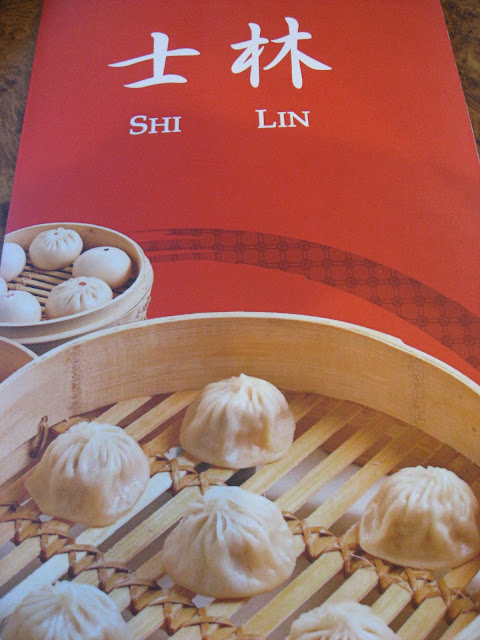 I honestly did not know where it was - its has been a while since I was at the Podium, so I was wondering where it was.  The restaurant was located on the same floor as Toy Kingdom.  When you first see it - you'll notice that the entrance is quite narrow and that there's a show window where the cooks are making the Xiao Long Baos manually.  This reminded me of Din Tai Fung, one of my favorite restaurants abroad.  I was skeptical, I thought - I'm sure the skin of the Xiao Long Bao will be thick, and I said to myself 'No restaurant can copy the thin skin of DTF!'

So when we sat down - I immediately ordered the Xiao Long Bao - I was excited to see and taste this restarant's version of the XLB.  The menu looked familiar too - the red color, the design of the logo, even the fare - it was so DTF!  When the XLB arrived in bamboo steamers - I was quite excited, and then my chopstick caught one - and it didn't rip - I said to myself 'PLUS points for Shi Lin!' and when I bit into the XLB - I was already impressed.  The skin of the XLB was just perfect!  It was thin enough to hold in the juices and not break easily.  I thought to myself - 'This XLB - coming from a copycat (remember, this is my opinion!) - was very well made!!'  I mean, look at Suzhou's, Crystal Jade and Lugang's - the skin is still thicker than Din Tai Fung's! :)  And since it was a local copycat restaurant, I was more impressed!  Think about it - Crystal Jade couldn't do it - Lugang too!  But Shi Lin was able to somehow give us the thinner skinned Xiao Long Bao! :)  Shi Lin's Xiao Long Bao - has got to be THE BEST 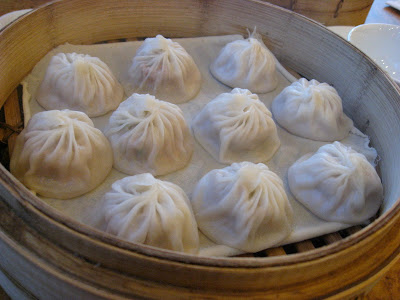 The BEST Xiao Long Bao (in Manila) for me!!
I also remembered how good Din Tai Fung's Noodles with Peanut sauce was so we decided to order Shi Lin's version with a bit more spice.  The dish in general tasted great, my only complaint was that the noodles were not as fine as I was hoping them to be - they were actually unevenly shaped, but nevertheless - I enjoyed eating them whilst sweating out the spicy-ness!  I also ordered take-out for my mom to try!  And she agrees that its really good! 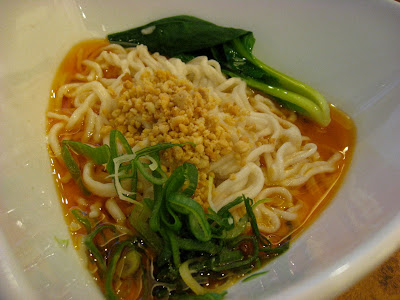 Spicy Peanut Noodles
The Beef Noodle was also good - the soup was very flavorful - and the nice thing was that when I asked for extra soup twice - they didn't charge me for them! :) 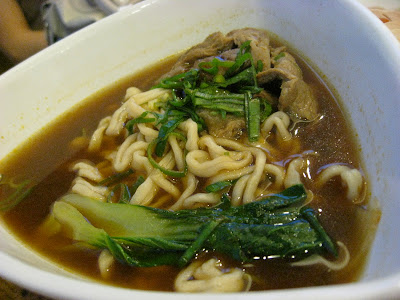 Beef Brisket Noodle Soup
As for the Drunken Chicken that we ordered - it was served cold (as it usually is) this was the only complaint of my friend Selene - but my Panget liked it and was used to eating this dish, cold!  I didn't try it because I have this thing of not eating chicken that is steamed or with liquid-y sauce, but there are exceptions!  Haha!  Yes, I am that maarte when it comes to chicken. 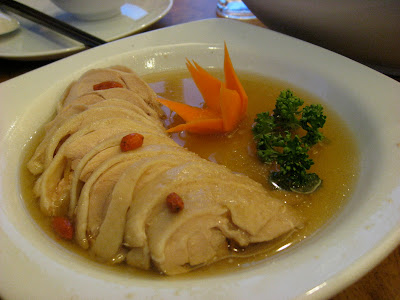 Drunken Chicken
For dessert it was Selene's request that we order the Taro Dumplings.  This friend of mine LOVES taro so much - and true enough - they also tasted yummy.  The Taro dumplings dish was a refreshing end to our early dinner - it was not overpowering but it was tasty - the sweetness was just right. 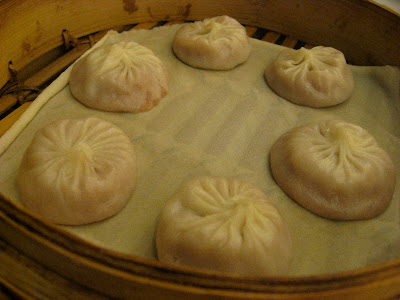 Taro Dumplings
Overall - I enjoyed my dining experience in Shi Lin.  I was really really impressed - I don't know if I was just hungry or what, but I liked everything that I ate there.  I am excited to bring my family there to try it out1  I just hope that the skin will be the same - still thin.  Hahaha!! :)

Kudos to whoever thought of putting up Shi Lin - your Xiao Long Bao has to be THE closest thing to Din Tai Fung that we have here in Manila!  No need anymore to buy the expensive franchise anymore!  Hahahaha... :)  Galeng!

November 02, 2010
This month, I am celebrating my blog's 5th anniversary! To start the month right, I am giving away eight (8) movie passes to Festival Mall Cinemas!! All you need to do is leave a comment. Any comment will do! Just include your name and email address so I can contact you in case you win!! You can join as many times as you want.  Winner will be picked via Random.org. This is a winner take all contest, so only one winner will get to have all the eight (8) movie passes! Contest will run from today until the end of the week - November 6, 2010 at 11:59pm Manila time.  I will be announcing the winner on Sunday - November 7, 2010! Good luck!!
255 comments
Read more