My learnings from the Papal Visit

January 24, 2015
When the Pope announced that he would be visiting Manila, I was excited.  For I knew that we are very lucky to be graced by the Pope - the whole country that is!

More than a month before the Pope's arrival, my Panget decided to go on a holiday.  He predicts that the days of the Pope's visit would be declared holidays.  Two weeks after - we was right.  It was declared a holiday from January 15 to 19.

Even if I wasn't here during the arrival - I caught a glimpse of the Pope on TV.  The welcome was massive and I can't explain the feeling - I was teary eyed and very happy.  My heart was very excited and grateful.  Sa TV palang yan ha!

I must say - the country seemed to be very peaceful.  Most every one of those who went to Luneta were following rules.  They weren't trying their darndest to go and jump over the barricades.  Everyone was cooperative.  It was a proud moment as a Filipino - because it was then that I realized that - WE CAN DO IT!  We can be disciplined if we want to.  We can be compassionate and helpful to our countrymen.

I was impressed by the logistics and security.  The barricaded path was great!  The route was also very smooth!  In my mind - the person behind this whole thing, the planning and the logistics should be lauded.  It was only last Monday that I learned that it was DILG Sec. Mar Roxas who was behind the whole thing.  I think he deserves to be complimented and congratulated on a job well done.  I have congratulated him on Twitter, and honestly - I don't seem to read any write-ups of how good the security was nor commending the person who thought of the routes, the quadrants and the other details.

Why are we Filipinos very shy of appreciating the people who deserve to the complemented?  We do not give credit where credit is due BUT we bash ENDLESSLY and criticize small little things.  Why can't we be positive?  Why can't we appreciate?

I was also impressed with the all of those who went to Luneta just to witness the and be physically part of the Papal Mass.  They were very cooperative and they sacrificed a lot!  Imagine being drenched the while waiting.  Shivering in the rain and cold air.  Everyone was excited - and honestly, it was contagious!  Even on TV I was on a *high* and that doesn't happen often.  Everyone was good in following directions.  No one wanted to steal the show.

But after - the bashing came.  Flak was given to the priest emcee who was chanting.  Kawawa naman.  I know that everyone has an opinion about everything, but you there are some opinions that you need to keep to yourself.

Then the issue that street kids were kept in a resort far away from the Papal visit.  I thought about it and I don't see anything wrong there.  These kids will just be wandering around the area asking for alms - we all know that most everyone who went to Luneta won't be bring their wallets right?  And these kids will only suffer because of the crowd!  They will just be squished helplessly in the crowd and the barricades!  So instead of people making a fuss about it why not think of it this way - these kids experiences something they will never experience in their lives.  They were fed full meals and they were taken cared of.  Why not focus on that?  I'm sure some will say that they deserve to see the Pope - question, are they even aware of who the Pope is?  I'm sure they don't know who he is!  So, please STOP making a big deal out of it!!  That's the problem with Philippine politics, they will make an issue of a non-issue because they want to make noise and be heard of TV.

On the issue of the recent terror attacks in Paris, I was moved with the wisdom of the Pope with his thoughts on the Charlie Hebdo attack


I never thought of it that way.  He makes a lot of sense and I am proud to be Catholic!!  I have friends who come from so many religions and I have never discouraged them or convinced them to change their views.  I respect their beliefs and I will want them to respect my beliefs as well. 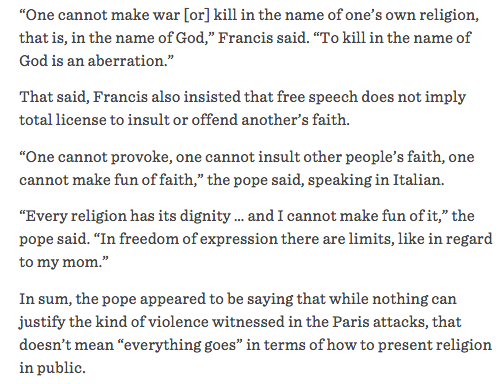 I'm sure that there will be comments that the Catholic/Christian faith has killed so many in the past.  Yes, I know that - and I think we have come to a point in learning from what happened in the past.  There is no use to bring back history just to strike a point that what happened was wrong.  I am Catholic and I know it was wrong.  I don't think there is one religion that is perfect.  What is important is to have a relationship with God (or your chosen higher being).  For me that's the end all and be all of any form of religion.  Whether you are Catholic, Christian, Born Again, INC, Anglican, Orthodox, Jews, Muslim, Buddhist, Sikh, and all to other religion (I apologize for not mentioning your religion as these above are the only ones I am aware of).

Let's just all get along.

We NEED to get along..